Efi – The End of Processing 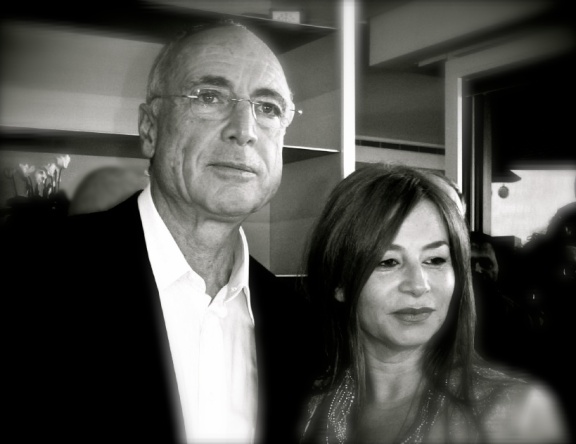 Last Saturday, we were invited by our friends Karen and Steve to celebrate Karen’s birthday at Walima, our favorite Moroccan restaurant on Avenue Road.

As the evening progressed, the conversation meandered gently from place to place, from our lives back in Africa, Israel and Europe to our great migration to Canada. Lindy and I spoke of our wonderful years working for Scitex, by far the most exciting and most advanced high-tech company of its time.  Our friend Steve marveled at hearing stories of scientific wonder, astonishing technological prowess and deep collegial camaraderie.  At one point, he asked us: “What made Scitex such a fantastic company?”

“Efi Arazi!” I replied, with little doubt or hesitation, recalling with nostalgia and fondness some of the best and glorious hours of our lives.

The very next day, Lindy received an email from our old friend Alan Noon, who used to work for the Scitex Demo-Center in Belgium. “You are going to be very upset,” she said, with some palpable apprehension and gentleness in her voice.  “Alan just wrote … Efi died this morning.”

It was suddenly with melancholy and a very heavy heart I remembered many of the fantastic stories of our glorious days at Scitex, some of which I had recalled with joy and great excitement the night before.

I remembered the incredible team spirit animating all of us at Scitex, when I joined in 1989. Colleagues from the demo-center driving in the middle of the night in their pajamas to deliver mag-tapes with scanned CTs to anxious customers. A question always lingered in our minds: were they all wearing Scitex underwear under these pajamas?

I remembered the Zen-like attitude of Shlomi Tauber – an ex top-gun pilot from the IDF. For a year or two, I shared an office with Shlomi and Eli Baron in the Avenue Louise Scitex office.  Shlomi’s desk would always remain clean and void of anything resembling vaguely a work utensil of any kind.  Not a pen.  Not a file.  Not a piece of paper – nothing!  Just a phone that Shlomi would be working all day long.  Shlomi had been assigned some sort of mysterious R&D customer feedback and troubleshooting mandate for Scitex workstations.  As the legendary Maytag Repairman, he would sit with his feet on his desk all day long, chatting in Hebrew with Israel.  From time to time, Walter Waes, the VP in charge of our department, would pass by, open the door and ask Shlomi what he was up to?  Invariably, Shlomi would be smiling confidently and, without any attempt to remove his feet from his desk, would say: “Don’t panic Walter. Everything is under control. It’s kol beseder.” And since indeed Shlomi always seemed to have all troubles under control, Walter would never insist, and move on to other more pressing matters. 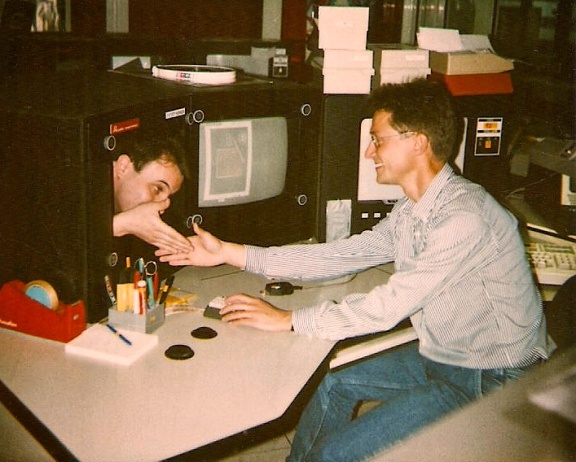 Eli Baron had a doctorate in Physics and a number of scientific patents registered in his name, mostly pertaining to colour spaces and colour management. He was a leading expert in colour modeling and a typical Einstein-like, distracted “Savant” always sidetracked to some complex and perplexing problem.  He was also one of my favorite Scitex characters. In the morning, I would invariably welcome him, coughing-out the same words. “Good morning Doctor Baron. I am not feeling too well today. A bit of a sore throat. Would you mind having a look?”

From time to time, I would ask him a fundamental question about colour calibration or image resolution, and he would excitedly start drawing convoluted equations and schematics that I would then take the next three days to decipher.

I remembered the amusing story of Eli Baron, being sent to a French customer with Kobi Milo, one of Scitex’ best hardware engineer, both trying to solve calibration issues with a brand new IRIS inkjet printer. Once the problem was resolved, adopting the typical Israeli no-fuss minimalistic approach, they both submitted eloquently succinct reports of their interventions:

I remembered many touching and hilarious stories of our wonderful years at Scitex Europe.  When hearing the sad news of Efi’s passing, I remembered particularly a Customer Meeting, Place Vendome, in the fall of 1989. I had been asked to provide technical support for the French sales executives.  I was traveling with Walter Waes and Chris Van Ashe, two senior colleagues from our Brussels office.  In the evening, Efi Arazi and his wife joined us for supper.  Efi was wearing brown corduroys and a turtleneck.  He was relaxed, warm and friendly. We walked for a while along Rue des Capucines, looking for a restaurant. Efi asked me about my background and what I thought of Scitex.  I told him that I grew up in Brussels most recently with a family of Scitex Imager III workstations to which I had started to bestow anthropomorphic attributes.  I added that I had grown to know the System intimately and would talk to him as astronaut David Bowman would talk to HAL in 2001 Space Odyssey.  I would often implore the System, as one would beseech a supernatural being, to complete tasks I had assigned.  It was indeed quite frequent that we would launch executes or heavy processing in the evening, go home, sleep a couple of hours and get back the next morning to mysterious and unknown outcomes:  occasionally the system would still be calculating, sometimes the task had failed, but in most instances, we would find a successfully completed process with a flawless digital image or a complex page layout ready to be sent to the plotter.  I facetiously added that time and time again, I would feel like Moses on Mount Sinai, exhorting the system and firmly expecting to hear it talk back to me: “Isn’t that what life is all about? Isn’t the Scitex logo representing a begging operator praying for end of processing? Aren’t we all waiting for end of processing?”

Our conversation was humorous and lighthearted.  Efi had a great capacity for listening – even to seemingly futile existential stories of a young admirer – and seemed to enjoy my nonsensical humor.

Sadly, it was the last and only opportunity I ever had of talking to Efi. It was already the end of an era at Scitex.  Efi was unfortunately about to leave the company and Scitex would not survive his departure. I met him one last time, at a Graphic Arts conference in Rotterdam a few years later. Like Steve Jobs, he had rebounded from having been ousted from the company he founded, and had re-invented himself with a new company called Electronics for Imaging – efi.

In contrast to the fancy multi-media presentations of other speakers, Efi took the stand that day with nothing but a few blank retro-projection cellophanes and a couple of colour markers. In a few minutes, he dazzled everyone in the room with his visionary and charismatic approach to the imaging industry. It is the Efi I will remember. Drawing in mid-air, processing on the fly, creating with thrilling excitement futuristic designs and inventions.

I am praying today, for Efi, for his loved ones, and – regretfully – for the end of processing.

Michel Botman was born in Belgium, where visual arts have always flirted with the limits of reality. In the eighties, Michel Botman started exploring the first tools to manipulate images though computers. For about 15 years, Michel Botman worked throughout Europe in the emerging field of Computer Applications for the Graphic Arts. Extensive experience in Digital Imaging allowed Michel to move into the field of computerized systems for Diagnostic Imaging. As VP Sales & Marketing for eSys Medical and later with Eclipsys, Michel Botman always remained dedicated to the creativity and innovation that are at the heart of his career. At the present time, Michel Botman is refocusing his life towards graphic arts. “I studied photography in Europe, but never had time to practice it enough. Life took me on other paths towards computer technologies and running a business. I enjoyed it very much, but I also love art. I always keep my eyes open for exciting opportunities and people that touch my heart.” Michel Botman currently lives between Toronto, Canada and Bangkok, Thailand. Above Gravatar pictures are of Michel Botman and his son Noah Botman.
View all posts by Michel Botman →
This entry was posted in Current Events, Digital Imaging, Family, Scitex and tagged Alan Noon, Arazi, efi, Efi Arazi, Electronic for Imaging, Eli Baron, exscite, Imager, Imager III, Jean-Claude Van Holder, Kobi Milo, Lindy Amato, Liz Waterworth, Michel Botman, Michel Botman Scitex, Scitex, Scitex Europe, Scitex System, Sebastian Rockstroh, Shlomi Tauber, Shomo Buzaglo. Bookmark the permalink.

1 Response to Efi – The End of Processing