As many of our loved ones journeyed from Poland to Israel, traveling across the world from a somber Yom HaShoah commemoration in Auschwitz to a glorious Yom HaAtzma’ut celebration in Massada, we are also to remember the thousands of survivors who embarked on a much harsher crossing, many years ago, in the midst of the Jewish Holocaust. We are to remember the extraordinary escape of millions of Jews, expelled from Europe, unwelcomed by most, pushed into a perilous journey that took them back to their long-lost promised land, a journey towards the birth of a new nation in the sands of their ancient homeland.

A few weeks ago, in Yad Vashem, President Obama spoke magnificently, in forever brilliant and inspiring words, of the tragedy of the Holocaust, of love, hate, of righteous men and survivors, of humanity’s grandeur and most tragic failures.

Buried somewhere in the middle of this particularly thoughtful address, were a few carefully crafted words, addressing the very birth of the State of Israel and its existential connection to the Holocaust itself:

“Here on your ancient land let it be said for all the world to hear, the State of Israel does not exist because of the Holocaust, but with the survival of a strong Jewish State of Israel such a Holocaust will never happen again.”

Since the creation of Israel on May 14, 1948, there has always been what I personally consider to be a misguided consensus of denial towards the obvious causal relationship between the horrendous persecution of the European Jews, the Holocaust, and the subsequent creation of the State of Israel.

This strangely consensual denial appears to be based on two main impetuses:

On one hand, the extreme apprehension of the Jewish Nation to link the re-birth of Israel, rising from the ashes of the Shoah after two thousand years of Diaspora, to Anti-Semitism and the Holocaust, what many fear would somehow shed a positive light onto the Holocaust tragedy – for which there should never be any justification, even accidental – and could perhaps delegitimize the Jewish millenary connection to the land of Eretz Yisrael, the land occupied by the tribes of Judah and Israel thousands of years ago.

On the other hand, European and Arab nations – and to a certain extent nations around the world which did little to protect or welcome the Jews before, during and after the Second World War – are extremely reticent to admit that the very creation of the state of Israel – a particularly thorny issue on any political agenda – is in great part due to their own actions, or blameworthy inaction.

I strongly believe that this historically inaccurate consensus is extremely damaging, not only to the State of Israel itself and for its image in the international community, but also to a deeply frozen Peace Process for the Middle East that should urgently lead to the just and equitable creation of a Palestinian state.

Noah Botman in the shadow of death, Majdanek, April 2013 (The March of the Living)

There is no doubt that the immensely remorseful guilt weighing on the conscience of most European nations associated directly or indirectly with the Holocaust played a crucial role in the United Nations’ 1947 vote in favour of a partition of British Palestine into distinct Jewish and Arab states.

One should remember that in order to pass, UN resolution 181 required a two-thirds majority or, at the time, a minimum of 31 votes.  The partition was ultimately approved with a thin majority margin of 33 favourable votes, 13 against and 10 abstentions. Today, a largely anti-Israel United Nations Assembly would never come close to the two-thirds majority required for the creation of both a Jewish state and an Arab state in what used to be British Palestine.

Admitting the substantial impact of European Anti-Semitism – Pogroms and Holocaust included – on the creation of a Jewish State should in no way diminish the historical connection of the Jewish People to the land of Israel and Judea – an existential connection that few nations around the world can rely upon with equivalent certainty (or duration) for their own legitimacy.

What it does, however, is remind many nations of particularly short memory –European and Arab, including Palestinian Nationalists – that their very own Anti-Semitic actions led to the expulsion of approximately 9,000,000 Jews from Europe and the Arab world, of which 6,000,000 were murdered and 3,000,000 escaped extermination, fleeing in a large part to the land of Palestine. 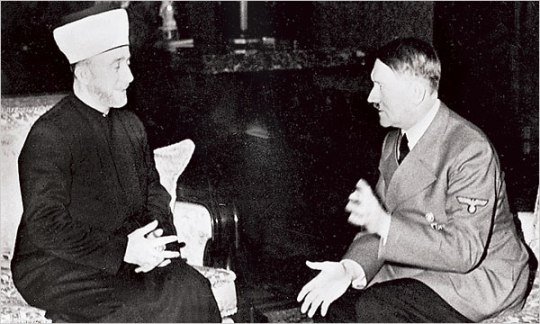 Some would only be too happy to forget that during WWII, Haj Amin al-Husseini, the Palestinian* Muslim leader and Grand Mufti of Jerusalem supported the Jewish genocide perpetrated by Nazi Germany. This ideological support towards the extermination of all Jews backfired dramatically for the Palestinian people, resulting ultimately in the mass migration of over 1,000,000 Jewish survivors and refugees to British Palestine.  It would be a grave historical injustice to forget this ironically unintended but nevertheless very real involvement of the Palestinian National Movement in a war that eventually led to the creation of the State of Israel.

Similarly, it would be another historical injustice to forget that it is another Arab war, launched by the Palestinian Arab forces and a coalition of Arab states after the establishment of the Jewish State on May 14, 1948 – including Egypt, Jordan, Iraq, Syria and Lebanon – that ultimately led to an astounding and unexpected Arab defeat, the exodus of Palestinian civilians fleeing the advancing Arab armies, the loss of Palestinian territories and a further increase of Jewish refugees to Israel fleeing the Arab countries supporting the war.

Palestinians today are often depicted as the victims of western colonialism and a succession of historical events undertaken by European nations, the United States or by Israel itself, actions that are often defined as imperialist, expansionists and which are being presented as having consequently marginalized the Palestinian people. This analysis would sadly omit the fact that the Middle Eastern geopolitical situation today, including the situation of the Palestinians people in Jordan, Gaza and the West Bank, is in no small part the result of actions undertaken by Palestinian leaders themselves and countries, including Arab countries, that collaborated directly or indirectly to WWII, the Jewish Holocaust and the 1948 war against the Jewish people of Israel.

Small sign written by Noah Botman placed on the rail track between Auschwitz and Birkenau “For the 1900 of Rhodes Island and the 151 of them who survived Hitler’s Evil” (March of the Living, Poland, April 2013)

Ultimately, one must remember that the Exodus of Jews to Israel occurred primarily from countries were Jewish communities had been well established for countless generations: Germany, Poland, Soviet Union, Austria, France, Romania, Hungary, Bulgaria, Czechoslovakia, Turkey, Morocco, Iraq, Iran, Yemen, Egypt, etc. These countries, and countries that promoted Anti-Semitism and the persecution of Jews, bear a collective responsibility towards the creation of the State of Israel and the current geopolitical situation of the Middle East.

The Jews did not run cheerfully to the land of their ancestors.  They lived quite happily in Warsaw, Berlin, Vienna, St Petersburg, Amsterdam, Prague, Paris, Rodos, Rome, Istanbul, Bagdad, Teheran, Alexandria, Casablanca, and countless other places, before they were pushed them away implacably.  They suffered greatly – more than any other people on Earth.  The Jewish refugees had nowhere to go.  For many, it was Israel or the crematoria. They had no other choice.

Noah Botman and Toronto students, Massada, Israel April 2013 (The March of the Living)

There are many people on both sides of the territorial and legitimacy dispute arguing there never was a state of “Palestine” or, for the matter, a state of “Israel” before 1948. These considerations are, in my mind, entirely futile, since realities on the ground never comply neatly with ideological, political or legal designs.

Post Scriptum: Reconciliatory coexistence would be a first step and the only option for peace in the land of Israel and Palestine. Mothers have lost children on both sides and wounds are still throbbing with pain. There is unfortunately no other way than mutual acceptance to avoid further losses and endless suffering.

Not so long ago, during World War I and World War II, German and Allied armies butchered close to 100,000,000 of their children. Lands were conquered, occupied, shattered, lost, re-conquered and freed. Borders were altered. New countries were born. Civilians were expelled and relocated. Maps were re-drawn. There will forever be pain and tragic memories. However, today, Germany, France, England, Poland and most countries that played roles in this dark theater, sit at the same table under the same banner and share a common European destiny for the common good of their children. Peace was not easy or effortless but Peace is always far better than war.

Michel Botman was born in Belgium, where visual arts have always flirted with the limits of reality. In the eighties, Michel Botman started exploring the first tools to manipulate images though computers. For about 15 years, Michel Botman worked throughout Europe in the emerging field of Computer Applications for the Graphic Arts. Extensive experience in Digital Imaging allowed Michel to move into the field of computerized systems for Diagnostic Imaging. As VP Sales & Marketing for eSys Medical and later with Eclipsys, Michel Botman always remained dedicated to the creativity and innovation that are at the heart of his career. At the present time, Michel Botman is refocusing his life towards graphic arts. “I studied photography in Europe, but never had time to practice it enough. Life took me on other paths towards computer technologies and running a business. I enjoyed it very much, but I also love art. I always keep my eyes open for exciting opportunities and people that touch my heart.” Michel Botman currently lives in Toronto, Canada. Above Gravatar pictures are of Michel Botman and his son Noah Botman.
View all posts by Michel Botman →
This entry was posted in Current Events, Family, Holocaust, Israel / Judaism, Noah Botman and tagged anti-semitism, Grand Mufti of Jerusalem, Haj Amin al-Husseini, human-rights, Israel, Majdanek, majdanek poland, Majdanic, middle-east, Noah Botman, Obama, Obama Yad Vashem Address, Palestine, politics, President Obama, President Obama Yad Vashem Address, Religion, shoah, UN resolution 181, World War II, Yom HaAtzma’ut, Yom HaShoah. Bookmark the permalink.