Not just a number 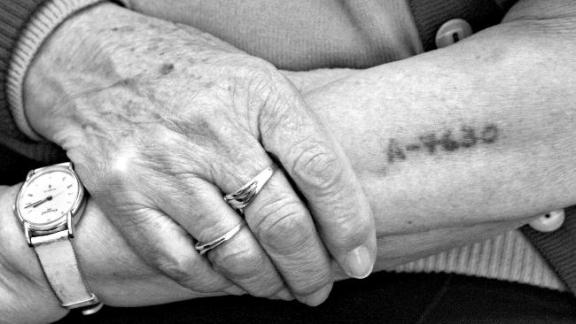 A-7630, Holocaust Survivor (Thx to our friends at Google Images)

Every afternoon, I drive to CHAT, the Hebrew Academy where my son Noah goes to school.  It has been part of my hectic schedule for the last few years, and, despite the laborious routine, something I always look forward to with particular anticipation.

I pick up a couple of remarkably bright kids; Jesse, Shai, Hannah, some of their friends, and drop them along the way, on our journey back home.  It is always a delight to hear these witty kids discuss and argue with each other the topic of the day.  Education, science, politics, philosophy, history, social events, music, books, movies, computer games, cartoon characters, video games … these are just a few of the endless subjects that arise in the vast gamut of often controversial issues being addressed.  I feel like a fly on the wall and enjoy greatly spying on their brilliants and constantly evolving minds.

A few days ago, as my son Noah and I were driving home and all his friends had left the car, Noah asked me a question about the Holocaust.  Since it is Holocaust Education Week and he is about to embark on the “March of the Living”, a life-altering event for many Jewish teenagers, the matter was probably more on his mind than it would have been at other times.

“At school, today, they told us that more and more people chose to tattoo concentration camp identification numbers on their arms.  How do you feel about it?”

“I don’t have a problem with it”, I said instinctively. “I can understand that some will not like it, but I think it is a valid way of honoring people who suffered during the Holocaust”.

I was caught in a tight corner.  As a father, and like most parents, I would certainly not be too happy to see my son etching any kind of tattoo on his skin, but on the other hand, I understood the particularly significant symbolism of the action.  This was no ordinary tattoo.  The matter was a delicate one to address.  In the back of my mind, I was certainly thinking of much worse stuff teenagers could be tattooing on their bodies – in fact, pretty much anything that I could possibly think of or had ever seen.

I reflected on the question for a few seconds.

I then told Noah what I had already told him on the day of his Bar Mitzvah.  I told him that I remembered spending a few weeks in Poland in the mid-eighties and visiting Auschwitz when it was just a desolate and abandoned place.  I said: “Although I was not Jewish and knew very little of Judaism, when standing in the midst of such horrific tragedy, I could not stop but feeling Jewish deep inside.” I told him that I could feel it like a burning iron on my skin.  Something that I would never forget – ever.  I told him I understood the reasons and the urge. 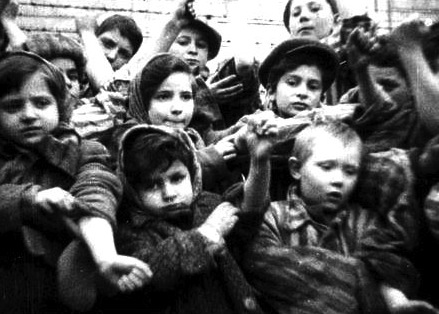 Children showing their tattoos when liberated by the Soviet Army. (Auschwitz January 27, 1945) . (Thx to our friends at Google Images)

Perhaps the worst facet of the Nazi Holocaust, beyond the murder of millions of Jews, homosexuals, handicapped, Tziganes, and political resistants, was the deliberate and active dehumanization process that took place relentlessly in the camps.

I told him that when his parents and grandparents tell him, “Never again,” they are counting on him to carry with him their memory and to pass it along like an Olympic flame of righteousness and greater morality, from generation to generation.

I understand that children and grandchildren of Holocaust victims and Holocaust survivors would want to tattoo on their own skin the mark of pain and suffering that stained the arms and hearts of their loved ones.  I understand that in the future, their own children may want to do the same and pick up the flame.

It is a way to honor and a very personal form of “com-passion”: “I was there with you.”  “I feel it in my flesh as you felt it in yours.”

It is a way of bringing new faces to a tragedy slipping slowly and ineluctably to the forgetfulness of history: “We are not numbers, we are numerous.” “We have survived.” “Here we are.”

It is a way of keeping the flame alive: “We will remember you.” “You were not just numbers.”

Michel Botman was born in Belgium, where visual arts have always flirted with the limits of reality. In the eighties, Michel Botman started exploring the first tools to manipulate images though computers. For about 15 years, Michel Botman worked throughout Europe in the emerging field of Computer Applications for the Graphic Arts. Extensive experience in Digital Imaging allowed Michel to move into the field of computerized systems for Diagnostic Imaging. As VP Sales & Marketing for eSys Medical and later with Eclipsys, Michel Botman always remained dedicated to the creativity and innovation that are at the heart of his career. At the present time, Michel Botman is refocusing his life towards graphic arts. “I studied photography in Europe, but never had time to practice it enough. Life took me on other paths towards computer technologies and running a business. I enjoyed it very much, but I also love art. I always keep my eyes open for exciting opportunities and people that touch my heart.” Michel Botman currently lives between Toronto, Canada and Bangkok, Thailand. Above Gravatar pictures are of Michel Botman and his son Noah Botman.
View all posts by Michel Botman →
This entry was posted in Current Events, Israel / Judaism, Society and tagged Auschwitz, Holocaust, Holocaust remembrance, Holocaust tattoo, Holocaust tattoo controversy, Tattoo. Bookmark the permalink.

2 Responses to Not just a number