The Political Correctness of the Hideous

The paradoxical “political correctness” of Israel bashing: new variations on an antediluvian theme.

Reflecting on recent publications and the state of multi-cultural and egalitarian values in Europe, I found myself thinking of the primeval Greek democracy, the original cradle of all democracies.  In Greek mythology’s vast pantheon of gods, one can’t ever forget the striking face of Medusa.  The face of an intimately tortured woman surrounded by a multitude of hideous venomous snakes.  Beauty and revulsion, innocence and deception, good and evil, right and wrong, all intertwined in a knot of virtues and vipers.

Anti-Semitism is nothing new.  It seems to be the oldest obsession on Earth.  Heinous, immoral, abhorrent – many thought it had been constrained by what we hope to be the constant progress of civilization.  Alas, the worm is still in the fruit.  It seems to have morphed lately into some new venomous creature, some hideous and duplicitous beast, as the flocks of Medusa once turned into deadly snakes.

Gradually, insidiously, deceitfully, anti-Semitism has been replaced by anti-Zionism, the open and visceral hatred of Israel, and no less visceral hatred of the Jew behind the country, the people behind the nation.  The latter poison, being the new, acceptable, and politically correct face of the repugnant beast looming deep inside Europe’s unconscious psyche.

I don’t have much sympathy for the value of political correctness – particularly not at the cost of truth and even less as a form of consensual hypocrisy.  As we say in French, “ Il ne faut jamais avoir peur d’appeler un chat un chat.”

The distasteful cartoon, that many, including Rupert Murdoch, have called “grotesque”, shamelessly published – no less – on International Holocaust Memorial Day, by the London Sunday Times, is a clear example of such amalgamation of anti-Semitism and anti-Zionism; an example of Free Press being gradually abducted by insidious and paradoxical political correctness.

Some have claimed that Mr. Scarfe had fallen victim of “a-posteriori” censorship and political correctness, as expressed above by Mr. Murdoch – an inacceptable assault on freedom of speech and freedom of the press. (Note that the cartoon has since been removed from the e-edition of The Sunday Times, with apologies from the Editor in Chief).

I would claim otherwise.  I would claim that the opposite might actually be true.  I would claim that, in fact, Mr. Scarfe might have shielded himself behind the paradoxical and biased political correctness of the day, the prevalent anti-Israeli “flavor of the day” – the consensual criticism of Israel, represented in this case by its Prime Minister, Benyamin Netanyahu.

The cartoon itself reminded many of the countless anti-Semitic images published in Europe over the centuries, in Nazi Germany before and during the Second World War, in France during the Dreyfus Affair, and in my own country, Belgium.

Medieval anti-Semitic iconography: Jews feeding from the milk and feces of the “Judensau” (Jewish swine). These images were prevalent throughout Germany often engraved on buildings facing the entrances of the Jewish Ghettos. (Google Images)

Anti-Semitic poster encouraging Flemish people (Vlamingen) to take arms against the British and the Jews: “Our answer: the rifle in the hand!” (Google Images) 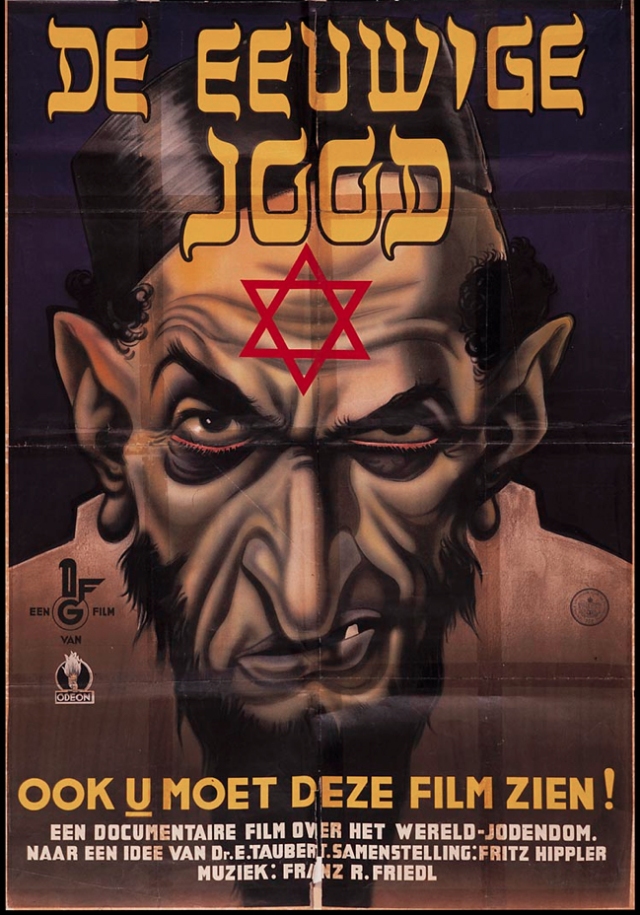 Flemish anti-Semitic movie poster: “You too should see this film”, “A documentary on the “world Jewry” (Google Images)

It is all there, in Gerald Scarfe’s drawing: The same Manichean imagery.  The same distorted and exaggerated characters. The large, bloodied Semitic nose. The evil eyes. The outrageous suggestions.  The trowel turning into a knife.  The wall of lamentation turning into a wall of destruction.  The blood.  The dying children.  The weeping women.   It is all there: revulsion, visceral hatred, vile irony.  It is all there, protected behind the hypocritical veil of political correctness.

I certainly do not object to the right of The Sunday Times to publish such article or Scarfe’s right to produce such a predictable cartoon.  I have always been a fervent defender of the absolute and unalterable right to free speech – even when offensive, immoral or distasteful – and, sometimes, particularly when offensive or objectionable, as often is, with Mr. Scarfe’s work.

I strongly believe that the risks associated with censorship – particularly with censorship justified by political correctness – are to a large extent much greater than the contempt or revulsion one may feel when confronted with objectionable publications.  In most instances, even when there are accusations as severe as anti-Semitism, I would always tend to err towards freedom of speech.  That great is my disdain of arbitrary censorship.

I similarly would always encourage some form of individual restraint – which should probably have been exercised by Mr. Scarfe in the above example.

It is a difficult exercise, based on balance and reason.  Sometimes drawing the line in the sand is excruciatingly difficult, but in this specific example, I would think that this line was unfortunately crossed.

It is indisputable that in Europe, anti-Semitic publication and imagery before the Second World War affected public opinion deeply and contributed greatly to its complicit indifference that ultimately pushed six million Jews into the gas chambers.  Today, there are very many voices around the world calling for Israel to be pushed into the sea.

We must make every effort to remember these tragic events – particularly on Holocaust Memorial Day.  On that basis alone, and in the memory of those who lived through these frightful years – some of whom are still alive today – I would strongly question the value, and more importantly the exceedingly insensitive timing, of the Sunday Times’ publication.

Photograph found in a German’s photograph album with the words
‘The last jew in Vinnitsa’ written on the back. (WW2Today)

A very good friend of mine recently pointed out that “political correctness would usually describe the hesitance to say something that may be true because of a fear it will offend.”  She wondered if my interpretation of the term, as it relates to anti-Zionistic opinion, was suitable and if the term “political fashion or trend” would perhaps be more appropriate?

I personally consider the prevalent anti-Zionistic discourse of the day as having gone beyond what she calls “a fashion or a trend”.  My conviction is that there is today a consensual demonization of the state of Israel that no longer offends or violates customary standards of restraint or political correctness.  In fact, my conviction is that such demonization happily flows within the general public opinion stream to the extent that the publication by a national newspaper of Mr. Scarfe’s cartoon, on National Holocaust Day, appears to have been unreservedly seen as “politically correct” and suitable.

Beyond these moral and political considerations, my primary and most crucial objection remains, however, the unacceptable distortion of truth that often occurs in the name of political correctness.  Freedom of the Press should not equate witch-hunting.

Proper journalistic conduct should denounce prevalent discourse of prejudice, and Art should never be consensual.  In this case, unfortunately, both the Sunday Times and Mr. Scarfe fell miserably short or these noble ideals.

In a not so distant past, what Mr. Scarfe produced would have undoubtedly qualified as outright propaganda.  It certainly does appear to be essentially a one-sided contribution to the usual Israeli bashing discourse and perhaps a deliberate attempt to distort reality – such as the fact, for instance, that the Israeli security barrier has drastically reduced the number of suicide bombing attacks on civilians and saved countless lives on both sides, a reality quite different to what Mr. Scarfe’s cartoon seems to imply.  Although the cartoon seems to be targeting housing construction in disputed territories, it clearly appears to be a depiction of the Israeli security wall, erected with the blood and corpses of Palestinian civilians – a security wall to which Mr. Scarfe appears to be opposed, as per the photographic statement below.

Sadly, two days after The Sunday Times publication, another British newspaper, The Telegraph, and an Irish newspaper, The Independent, both provided further examples of the only too-common anti-Israel bias that unfortunately verges very closely to propaganda or deliberate misinformation.

Both papers published articles on a recent Israeli air strike against a Syrian convoy or high-grade weapons heading towards Hezbollah territories in Lebanon.  Under the large headline “Israeli strike in Syria”, both papers placed an exceedingly misleading photograph showing the corpse of a Syrian child carried to the grave by his schoolmates. 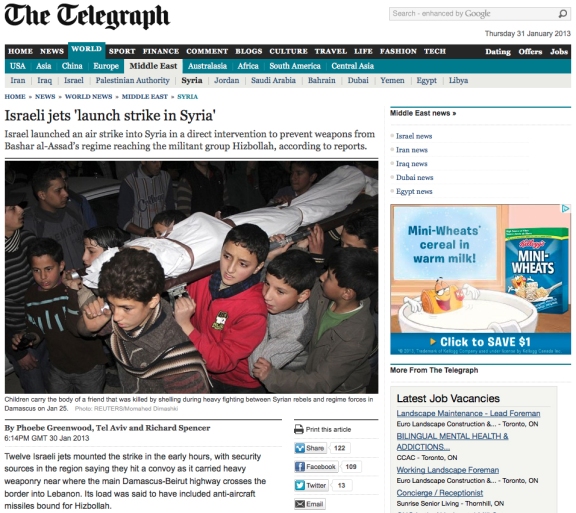 Could anything be more obvious, unambiguous, or unmistakable?  The picture of a dead boy under an “Israeli strike” title?  The semantic shortcut speaks for itself.

The image, of course, is worth a thousand words.  Many more words than the small, almost inconsequential, lower case clarification notice placed under the photograph indicating that, against all appearances, and against all presumptions of guilt, the young child was in fact killed by Syrians, in a confrontation between rebels and the Assad army – and not at all by an Israeli air strike!

Enlargement of caption under above photograph

Another eminent contribution of the British Press to journalistic deontology, to misinformation, and to the anti-Israeli political correctness that is so much “dans l’air du temps”!

Michel Botman was born in Belgium, where visual arts have always flirted with the limits of reality. In the eighties, Michel Botman started exploring the first tools to manipulate images though computers. For about 15 years, Michel Botman worked throughout Europe in the emerging field of Computer Applications for the Graphic Arts. Extensive experience in Digital Imaging allowed Michel to move into the field of computerized systems for Diagnostic Imaging. As VP Sales & Marketing for eSys Medical and later with Eclipsys, Michel Botman always remained dedicated to the creativity and innovation that are at the heart of his career. At the present time, Michel Botman is refocusing his life towards graphic arts. “I studied photography in Europe, but never had time to practice it enough. Life took me on other paths towards computer technologies and running a business. I enjoyed it very much, but I also love art. I always keep my eyes open for exciting opportunities and people that touch my heart.” Michel Botman currently lives in Toronto, Canada. Above Gravatar pictures are of Michel Botman and his son Noah Botman.
View all posts by Michel Botman →
This entry was posted in Current Events, Israel / Judaism, Society and tagged anti-semitism, antisemitism, Gerald Scarfe anti-israel cartoon, Holocaust, holocaust memorial day, human-rights, Israel security barrier, israeli airstrike in Syria, israeli security barrier, israeli strike in Syria, israeli wall, middle-east, political correctness, politics, The Sunday TImes anti-Israel cartoon. Bookmark the permalink.