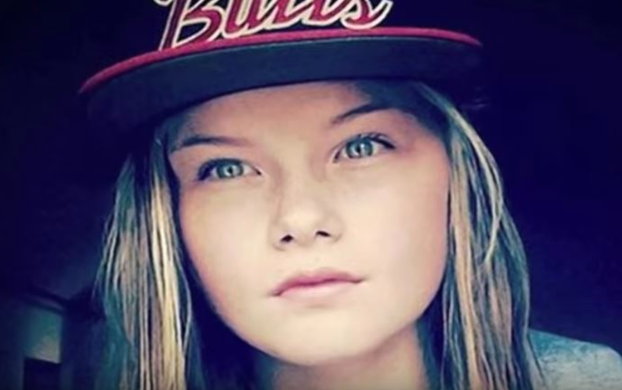 Few stories could be more heartbreaking than the story of Lisa Borch, the tragically misguided teen from Denmark, victimized for years by Muslim men twice her age, abused, manipulated, brainwashed and ultimately programmed to kill. The story of two victims fatally wounded by religious intolerance – a bleeding mother and a broken daughter.

Yet, the very same day emerged another story, in the heart of old Europe – a story of women standing up courageously for their rights and liberties.

I lived in Europe late into my thirties. When I turned 15, Lisa Borch’s age, I hitchhiked from Belgium to the South of France with my friends, Vincent and André. Summer after summer, I spent time on the roads of Provence, Ardeche and Toscana, gleaning fruits and unripe corncobs in the fields near Fontaine de Vaucluse, sleeping “à la belle étoile” on the beaches of Banyuls and Cadaqués, counting shooting stars in Cabannes and Vernaza, showering with delight and exhilaration in the occasional balmy rainstorms carried by the evening Mistral after long humid days in Camargue.

I remember intensely these days of unbound freedom, wandering from awe to miracle, from solitude to generosity, in the landscapes of Goya, Van Gogh and Cézanne, falling in love with Jeanne, like Modigliani, and with Alice, “la petite Anglaise”, feeling transformed by Kafka, rolling my very own stone along with Sisyphus and Camus, and sometimes, falling asleep peacefully, humming softly one of Satie’s nocturnes.

Many years later, when I would see hitchhikers on the side of the road, I would always give them a ride, remembering the bitter nights I spent shivering on the “nationale quatre” and the universal form of humanism I picked-up along the way. I often would invite them home where they would sometimes stay for days or weeks. I would give them refuge in my small apartment, only to find it ransacked and looted a few days later. And still I would persevere. And still I would believe obstinately in the goodness of human nature. Lindy, anxious, sensible and aware of my unsuspicious and naïve nature, would often warn me, and wish we could lock the door of our bedroom at night – only to remember, and perhaps regret, that our house had no doors.

A few days ago, Lindy inquired about my position on the European refugee crisis:

– You gave shelter to so many people, she said. You would never leave anyone on the side of the road; don’t you think that Europe should take in the refugees?

– Of course, we always need to keep our door open to refugees. Women, children, gays, Kurds, enslaved Yazidis, Copts, Druze, Christian minorities, etc. are at great risk, but these are not really the people banging on the doors of Europe right now. What we are seeing are tens of thousands of young men, many whom have fought on one side or another and perhaps were the oppressors, on one side or another, probably with little concern for the rights of minorities. It is complicated.

– It is not that I don’t like them, I replied with deeply conflicted feelings, … it’s that … they don’t like me!

They don’t like anything in me. They don’t like any of my values. They are full of convictions and I am full of doubts. Death to the big Satan, they shout! Should Zealots be trusted, I ponder? They hate my liberal agnosticism. My profound distrust of bigotry, patriarchalism and theocracy. My conviction of the equality of men and women. My embrace of freedom, tolerance, equality, education for girls, science, LGBT rights, and love – always, no matter what colour or gender.

They hate when I stand with the extraordinarily courageous women who often put their lives on the line fighting brutal and repressive Islamic ideologies. When I stand for Ayaan Hirsi Ali, Wafa Sultan, Malala, and these courageous women in France who recently stormed an Islamic symposium discussing (under the paradoxical protection of our freedom of speech) nothing less than the various motives expressed in Sharia law justifying the beating of wives by their husbands, the mistreatment of daughters and sisters by their brothers and fathers!

Two young women of Arab descent interrupting a debate on the various motives expressed in Sharia law justifying violence against women. “Nobody submits me,” wrote one of them defiantly on her chest. “I am my own prophet,” wrote the other. Women should not be coerced, forced, intimidated, beaten, they claimed … only to be kicked off the stage – literally and violently – confirming explicitly and unequivocally the very brutality imposed upon Muslim women that the conference was purportedly debating. (Screen capture via You Tube) 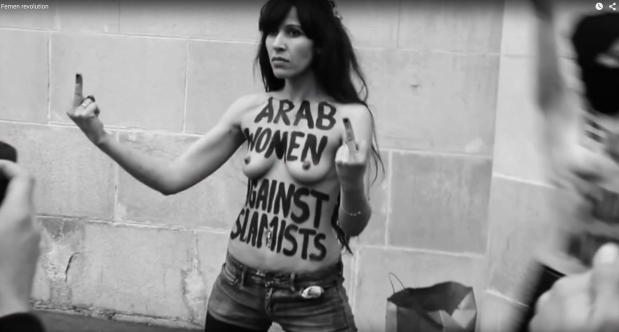 Screen capture via You Tube

These brave women are the exact opposite of subjugated Lisa Borch. They are the strong and free, uncorrupted incarnation of the unbounded strength and beauty of the human spirit and of the human body. I admire them as much as they hate them, and I hope that they know – at least when it comes to prejudice against women – that all men are not created equals.

Islam is “submission, surrender, obedience.” It is inherently a coercive ideology aiming to conquer and subjugate equally believers and unbelievers. Muslims women are the first victims. Some of them will not submit, but they could be killed for their convictions. Suffice to see what happened at Charlie Hebdo not so long ago, or to Malala. Who should we protect in priority? Who would you protect? Sometimes it is a question of either – or. It is Sophie’s choice. It is nor our choice. It is the choice being forced upon us! Islam is inherently a coercive ideology aiming to subjugate. Muslims women are the first victims. (Screen capture via You Tube)

I think there is a greater merit to protect our set of values and those who stand on guard to defend them. I have always been a rebel, sometimes without a cause, as Lindy would say ironically, and have suffered all my life to uphold my conviction in the unbound beauty and freedom of the human spirit. I strongly believe that tolerance, love, kindness, compassion, affection, gentleness, honesty, integrity, truthfulness, respect of other’s freedom, and essentially any form of goodness towards one’s fellow men are in essence humanistic values and emotions that come from the inside, from an innate understanding of right and wrong, from an instinctive recognition of the bond between all humans and our essential co-fraternity. I firmly reject any arbitrary code of laws imposed without philosophical, ethical, logical, humanistic or personal scrutiny, particularly when such a code of law happens to deny many of the humanistic values and human rights we now consider to be essential to our free, democratic societies.

I love, therefore I am. Ultimately, love is what makes us human. Love is God, not the other way around.

Michel Botman was born in Belgium, where visual arts have always flirted with the limits of reality. In the eighties, Michel Botman started exploring the first tools to manipulate images though computers. For about 15 years, Michel Botman worked throughout Europe in the emerging field of Computer Applications for the Graphic Arts. Extensive experience in Digital Imaging allowed Michel to move into the field of computerized systems for Diagnostic Imaging. As VP Sales & Marketing for eSys Medical and later with Eclipsys, Michel Botman always remained dedicated to the creativity and innovation that are at the heart of his career. At the present time, Michel Botman is refocusing his life towards graphic arts. “I studied photography in Europe, but never had time to practice it enough. Life took me on other paths towards computer technologies and running a business. I enjoyed it very much, but I also love art. I always keep my eyes open for exciting opportunities and people that touch my heart.” Michel Botman currently lives in Toronto, Canada. Above Gravatar pictures are of Michel Botman and his son Noah Botman.
View all posts by Michel Botman →
This entry was posted in Current Events, Islam and tagged Burka, burqa, coran, Democracy, discrimination, Education, femen, feminism, free speech, gender equality, Islam, islamism, Michel Botman, sharia. Bookmark the permalink.